A screenplay and short film created by Bedales student Freya Hannan-Mills has picked up not one, but two awards at this year’s Film the House Awards. 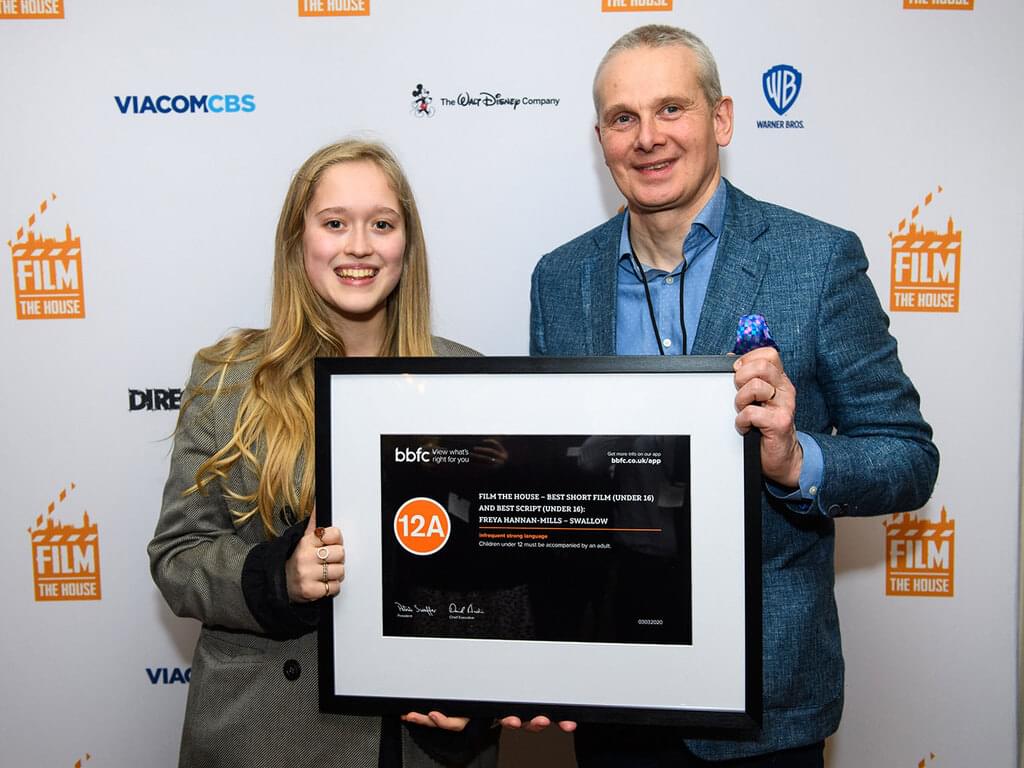 A screenplay and short film created by Bedales student Freya Hannan-Mills has picked up not one, but two awards at this year’s Film the House Awards.

Freya’s entry, Swallow, staved off competition from entrants across 80 British constituencies to scoop awards for ‘Best Film Script’ and ‘Best Short Film’ in the Under 16 category after being nominated by Angela Eagle, MP for Freya’s hometown of Wallasey.

Speaking after the winners were announced at a ceremony at the House of Commons on 2 March, screenwriter and ‘Best Film Script’ judge Jane Lamacraft said: “Swallow is a sensitive and authentic piece of writing with rarely seen, clear-eyed honesty. We loved the evocative, poetic language and the writer’s command of different styles. A young writer with an old soul.”

The Motion Picture Association’s Caroline D’Silva, a judge for the ‘Best Short Film’ category, commented: “Swallow is a simple concept, brilliantly executed, that captivates and draws you in emotionally and physically. Skilful cinematography and production design perfectly complement a powerful acting performance and script.”

It is the latest in a string of accolades for Swallow, which was selected to be screened at the TriForce Short Film Festival in December after being judged by a panel of influential industry figures including actor Idris Elba and Director Gurinder Chadha. Freya’s original script was turned into a short film by French film company Partizan last year, following a sell-out stage production featuring Olivier Award-winning actress Denise Gough at the Everyman Theatre in Liverpool in January 2019 and a second production at the Tristan Bates Theatre in London the following month.

It is also the third consecutive year Freya has been victorious at the Film the House Awards, a parliamentary-based film and scriptwriting competition for student and independent filmmakers in the UK. Last year, another of Freya’s short films, The Iron Grotto, won ‘Best Script’, again in the Under 16 category of the competition. A third film, Turning Tides, was named as the winner of the ‘Best Short Film’ in the Under 16 category in 2018.

Freya’s double award win comes just two weeks after she was signed by literary agent Mel Kenyon at Casarotto Ramsey, an achievement which is a major endorsement of her writing.

Freya said: “I am honoured to receive the awards from Film the House. My film is a personal response to being a young carer looking after a relative with a rare neurological terminal illness – Progressive SupraNuclear Palsy – and I am so pleased that it resonates with audiences. Mel Kenyon saw the film at the Polaris Awards Showcase at Home, Manchester and I feel very privileged to be joining such a visionary agent and company. I am currently developing a six-part television series.”

Head of Bedales Magnus Bashaarat commented: “Congratulations to Freya. It is wonderful to see her developing as a writer and to receive such prestigious accolades for her creative work.”